As you might have guessed by the sporadic total in the Book 2 word counter, NaNoWriMo did not go very well for me this year.

I started out grounded, my pace good, running a steady clip. At one point, I hit that sweet spot where the more you write, the more you want to write. I know the story; it’s outlined and notes go all the way to the end of Book 3.

She’s way out in front! Look at her go!

The last few years, my one or two annual misères have been pathetic copies of colds, of no real significance, and gone in just a few days. This one, however, was not. My immune system couldn’t handle it.

I had no fever. My throat felt as if I’d swallowed a sea urchin, my bones ached, and my constant sneezes could have powered a small steam engine. I don’t know what manner of critter it was or from whence it came, but it slapped me around like a little bitch.

Eventually I recovered, though I’d lost a solid week and my momentum. I was forced to watch all four series of Luther on Netflix to regain my strength (although Idris Elba nearly took it away again—yowza). Besides the Cold from Planet X, this tweet sums up what it’s been like trying to write lately:

I would love to settle into my thought cave and get some work done, but for a year it's felt like there was lunatic outside ringing a bell and holding a bomb, and I feel like I need to check to see if he's up to something.

But Book 2 is still a thing. And I’m still hunting for a home for Tunerville so all that work on the trilogy isn’t a total waste of time.

I’ve also been making notes for two other projects I’ll call Invasion and Petit Trianon (and that’s all you’re getting).  Both need a bit of research. Petit Trianon will require another trip to London, most likely. When, I have no idea, but I hope it’s soon, because I miss it. In a perfect world, I could afford to go at least once a year.

Such hardship, being forced to return to my sweet love. #NOT

I heard about a neat trick to power through first drafts. Taking the delete key off the keyboard seems to help some people.  I should remove the backspace key as well, though the thought of not being able to fix a spelling mistake freezes my very soul. Still, worth a try, especially since I’m thinking about writing Invasion concurrently with Book 2. That should be fun if I get a new job soon.

Meanwhile, Christmas will come in a little over a week and I have presents to make, in addition to all this writing. I’ll try to make it back here before the new year, but if I don’t, enjoy your holiday. Let’s hope we’re all still here by this time next year.

All I want for Christmas is indictments. #MuellerClaus

Hey all, I’m still around and still working on Book 2. I’ve gotten behind on my word count due to a nasty, vicious cold, and I’ve been unable to write for a few days. It started with the sore throat from Hell and has now progressed to sneezing and coughing. 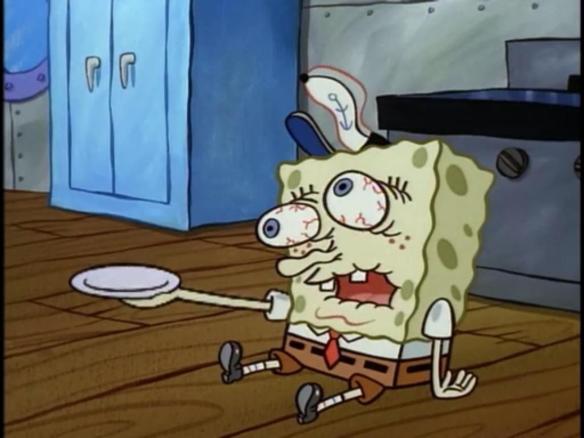 Basically me trying to do anything since Wednesday.

I decided not to post here every day, just in case I suddenly find a job, so I’d have a little breathing room. (Nothing yet; I did have an interview so fingers crossed.)

However, if you noticed, I’ve posted updates on the word counter at the top left of my home page. I’m up to 9,285 words.  A dismal count by NaNoWriMo standards, though it’s actually not going too badly. My first draft sucks, but they all do. Yes, I am cheating–I did take some prewritten bits and work around them. You know me. I never do anything quite the way I’m supposed to.

I’m feeling better today. I’ve taken this time to work on improving my first pages in Tunerville and tidying up my post-edit revision. Meanwhile, my Wolverine-like healing powers have begun to work on this cold.

First order of business–thanks to all who bought a copy of The Shiny Folk and other stories. I hope you enjoyed them. The money from the October sales will be on its way to Unidos soon. The book will still be available on the Buy Me page.

It’s almost November, and you know what that means, fellow writers and writing nerds. It’s nearly time for NaNoWriMo!

For chronic non-link clickers, NaNoWriMo, or National Novel Writing Month, happens in November. The goal is to write 50,000 words in 30 days. That’s around 1,700 words a day, roughly.

I’m a rebel.  I use NaNoWriMo to finish things. Technically, you’re supposed to start from scratch, but hell, I do what I want.

Yeah, I’m drinking milk out of the bottle. Fight me, bro!

Since I didn’t get very far with Camp NaNo this past summer, thanks to some incredibly stupid distractions, I shall finish Book Two of the Tunerville trilogy.  While simultaneously revising Book One, which I just got back from a paid developmental edit.

I expect to be a complete mess before the month is over. I’m unemployed at the moment, but if I get a job before NaNo starts (or worse, during it), it’s going to be crazy. So even though I’m a veteran, I’ve been checking out resources like this LitReactor article by Robbie Blair on how to prep for the challenge.

And here’s one by Leah McClelland on SimpleWriting.org with tips on how to organize your household so you have maximum writing time. If you’re tempted to join the madness and you have a family, prepping beforehand will be critical.

It’s not necessary to sign up–if you’ve been with me for a while, you know I do it on my own, usually. I did sign up formally once and I even have a friend who facilitates a local NaNo group. But I don’t write well in a room full of people; that triggered my anxiety and I didn’t get much done.

The Book Two word counter is in my sidebar already. You can watch that climb if you want. I’ll probably try to post every day in November too. Reporting to you will keep me accountable. I have an outline, so I’m nearly ready to roll.  A bit of world-building in my notes, and I should be good.

If you’re doing NaNo too, stop by here or catch me on Twitter and let us know how it’s going. For now, I’m going to enjoy my last night of freedom with a fish taco, a spooky pumpkin, and a scary movie.  Happy Halloween!