I am so happy for all my LGBT friends today.  In a history-making decision, the Supreme Court of the United States of America ruled that state bans on same-sex marriage are unconstitutional.  This includes every state in the union.  No exceptions.

Despite what the religious right would have you believe, this push for equality had nothing to do with God, or making everybody be gay (you can’t turn people gay; they are or they aren’t), or with forcing churches to perform same-sex weddings.

See, you can’t do the last bit because the Constitution says you can’t. If you make laws that are based on your religion, then you don’t have religious freedom, because you’ve forced everyone to abide by your religion whether they want to or not.  The Founding Fathers wrote the damn thing exactly this way to prevent you doing just that.

What it also says is that everyone has the right to life, liberty, and the pursuit of happiness.  At the time, people still thought slavery was pretty cool, that women were property and not people, and anyone engaging in “unnatural congress” was either a witch or a criminal (or both) and should immediately be put to death.

But you know, we learned some things between then and now.

No, it’s always and only been about legal marriage. The right to go to a courthouse and obtain a marriage license to wed the person you love.  You can have all the religion you want, but unless you have that piece of paper, you are not legally married and cannot avail yourself of the legal rights and protections that come with that status.  To name a few:

And let’s not forget the tragic story of Shane Bitney Crone, whose partner Tom Bridegroom died unexpectedly in an accident.  Tom’s family barred him from attending his funeral.  Shane could do nothing, because the two were not legally married.  From the linked article:

After Bridegroom’s untimely death on May 7, 2011, Crone was barred from attending the funeral and wake, and wasn’t mentioned in the obituary. His experience trying to obtain information from the hospital was similarly unsuccessful.  “To Tom’s family, I no longer existed, and to the government, Tom and I were mere roommates,” Crone notes.

Imagine if the love of your life died, and this happened to you.  Just think about it for a minute.

A friend of mine, Casey F., posted something on Facebook today that I’d like to share with you.  He was talking about the Confederate flag, but he pointed out our government is not supposed to discriminate (bold emphasis mine):

That’s part of our balance of government – the states have a certain amount of authority and the federal government has a certain amount of authority. And (in theory, anyway) the laws the state legislatures and Congress make are made by people we elect to represent us. The exception here is discrimination. Neither branch of government is supposed to make laws that discriminate. And our definition of discrimination is constantly evolving, so our laws must evolve as well….
So although the states should and do have the right to make their own laws as their citizens see fit, we are a civilized nation which should not allow discrimination on any level of government. So sometimes the federal government has to step in and say “no, you can’t do that because it isn’t fair to everyone, even if a lot of your citizens think it is.”

Way to go, Casey–you said it much better than I could.  It IS unfair to restrict the rights of citizens based on something they are and can’t help being–like being black.  Or female.  Or gay.

I experienced a mix of feelings today when I heard.  The first, jubilation.  I’m happy for my gay friends and loved ones who can get married now and have full legal status as life partners, same as my straight ones.  I said “YES!” out loud and did fist pumps at my desk when I saw the news.

The second, a little bit of surprise.  I honestly expected this not to pass.  I know, I know, but the justices of the Supreme Court are older, conservative people.  They have a lot of factors influencing their decision–I know courts are supposed to be impartial, but they are human also.  I expected it to go back to the lower court for some kind of weak amendment perhaps stating yes, it’s unfair, but maybe some bits are less unfair than others, and we can still do X but not Y.  As surprises go, this one rocked.

The third, pride.  For the first time in a very long time, I felt proud to be American.  Not fife-and-drum proud, but less embarrassed than usual.  Usually, when I go abroad, I want to hide.  I had actually considered cultivating a British accent so no one would know where I really live. 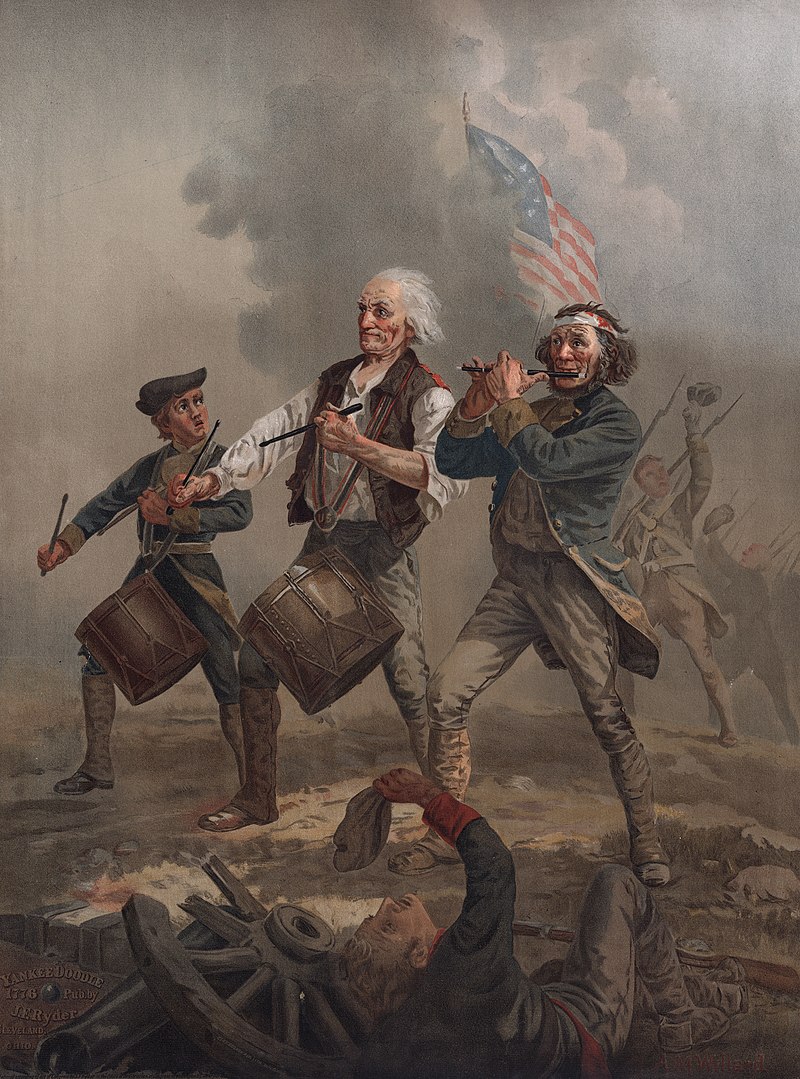 The guy on the left had a crush on the drum dude, you know.

Image:  The Spirit of ’76 by Archibald MacNeal Willard / Wikipedia.com

Everybody in my monkeysphere is aware that I want a family and they know I’ve had a terrible time finding the right man.  I joked with them, “Hey, now it’s official; everyone except me is allowed to get married!”   For once, however, I’m not jealous.  The people who fought for their rights, and who ran to the courthouse and got married today have put up with a huge load of shite and they deserve every bit of happiness.  They earned it.

All couples, gay and straight, Christian and not, black and white and every combination, should celebrate this day!  It’s not just a victory for gay people.  It’s a victory for love.

James Horner, Oscar-winning composer of the scores to Titanic, Avatar, and Braveheart, has died in a plane crash.

Confirmations are coming in from all over the news.  This is a sad day for film and music fans alike.  I was so fortunate to see him in London at the Titanic Live concert.  I’m so glad I went.  I cannot even.  I just CAN. NOT. EVEN.

Your last ride was not in that plane.  Rest in peace, Mr. Horner.  We will miss you very much.