Happy Banned Books Week!  The American Library Association celebrates knowledge and access once again by encouraging everyone to read a book that has been banned, challenged, or has otherwise sustained an attempt at censorship.

I’ve already gone into my reasons why censorship sucks and the reasons books get banned in previous posts (see links).  Today, I shall choose a few of my favorite books from the list and discuss them.

What better way to start this list than with a book in which thought control is a major plot point?  1984 shows a dystopian, totalitarian society of the future in which the government has total authority over everything the population does, from what they eat to how they think.  Individualism is criminalized and persecuted.

Our hero, Winston Smith, does the unthinkable–he begins to question this existence and even falls in love with a Julia, a fellow worker in the let’s-revise-all-the-history-of-the-world department of the Ministry of Truth (a rather ironic name at that).  The proles, working-class members of this society, have at least the appearance of freedom–they’re allowed to hook up, fight, sing, worship, etc.  But their lives are deeply controlled by restricted access to jobs, education, and forms of entertainment not fed to them by the Ministry.  Moles report and eliminate any attempts by proles to rise above their station.

1984 has delivered several choice words and phrases to the lexicon from the book’s Newspeak language.  Among these:

Big Brother – the titular figurehead of the government in the book.  The phrase “Big Brother is watching you” means you are being observed and your insubordination noted.

Thought Police (Thinkpol) – secret law enforcement of Oceania’s government, who seek out subversives by using surveillance through the telescreens in every party member’s house and psychological manipulation.  Refers to suppression of contrasting ideology in repressive societies such as Iran, Russia, etc.  Many also believe this is happening in the U.S. as religion-backed legislators enact faith-based laws in direct defiance of its Constitution’s establishment clause.

The novel contains themes of nationalism, censorship, and the growing awareness of surveillance.  Reasons ranging from sexual content to pro-communism make 1984 an oft-challenged book.

Fantasy as a genre often stirs people up–some folks associate magic, etc. with Satanism and sacrilege.  They forget that 1) magic isn’t really real, and 2) though Tolkien was quite religious himself (he was a devout Catholic), there is no mention anywhere in any of the books about Satan, God, Jesus, etc., certainly in no disparaging way.  Also, the hobbits, Strider, and Gandalf all smoke.  Well, they are adults, and I somehow don’t expect a bit of Old Toby from the Shire is going to hurt any of them.

Much has been made of Frodo as a Christ allegory, but Tolkien insisted LOTR has no such subtext, and we have to take his word on that.  However, through the use of literary doubling, Tolkien does present a dichotomy between light and dark (a much older concept that pre-dates any form of Christianity).  One might argue a somewhat Modernist take on industrialization vs. nature, after Tolkien experienced the horrors of World War I in comparison with a pastoral childhood.

Whether you agree or not, this epic fantasy set a standard for the genre and remains one of the most beloved classics of its kind. 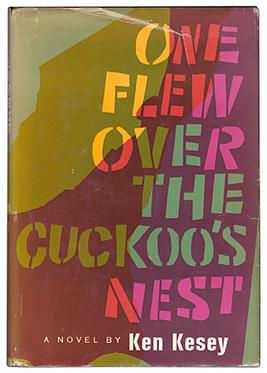 The main figure of the 1960s pro-psychedelic group The Merry Pranksters, Kesey used to work in a mental institution.  It was during this period he had opportunity to make close observations of the institutional system, which was being challenged at the time.

The novel presents themes of authority and control, both through individual coercion–Nurse Ratched’s subtle psychological manipulations–and the cultural and internal shame of anyone who is “different,” as a closeted Dale Harding describes himself.  It also touches on a larger, mechanistic view of society (Chief Bromden’s references to the Combine) in general.

It’s a fish-out-of-water story, in the person of loud and boisterous con man McMurphy, but one where the fish disrupts the status quo in long-lasting and profound ways.  Kesey also used the trope of an unreliable narrator to great effect here.  Chief Bromden’s feigned deafness allows him to suss out what’s really going on in the ward, but his observations are interspersed with obvious hallucinations due to his illness.

The 1975 film adaptation directed by Milos Forman, which was pretty damn good, won all five major Academy Awards (Best Director, Picture, Adapted Screenplay, Actor, and Actress).   The novel has been challenged for being pornographic, violent, and corrupting. 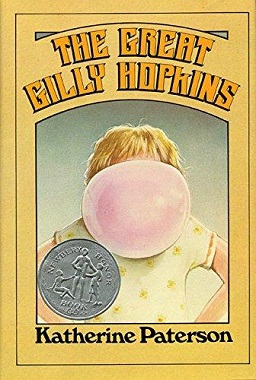 This was one of my favorite books as a child.  I still read it occasionally, having purchased a used copy at a library sale (I kept all my childhood books and added to them over the years).  The funny, poignant tale of a defiant foster child, this book earned a place on the ALA list due to mild profanity, Gilly’s racism toward her teacher, and her resistance to her foster parent’s deep faith.

It’s well worth a read for lively characters, good handling of a sensitive topic (foster care and how children in it close themselves off), and just all-around great writing.  Paterson also wrote Bridge to Terabithia, another frequently challenged book. 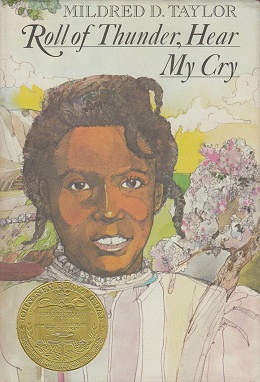 See that medal on the front of the book cover?  That’s a Newbery award, given to distinguished contributions to literature for young American readers.

This novel is about racism in a small Southern community during the Great Depression.  It was followed by multiple sequels —Let the Circle Be Unbroken (1981), The Road to Memphis (1990), The Well: David’s Story (1995), and The Land (2001).  I haven’t read the last two but they’re on my list.

Taylor gives us the Logans, a black family in the unique position of owning their land, which is constantly under challenge by a wealthy white man who wants to take it away from them.  They deal with systemic and overt prejudice in myriad ways.

The Logan family has become one of my literary favorites.  They’re tough, they work hard and love even harder, and they withstand everything life throws at them.  They stick together no matter what and stand up for friends and neighbors, even though it’s difficult and heartbreaking at times.  And I find the character of Cassie Logan quite relatable–she feels the injustice keenly as she grows up and is extremely frustrated by her inability to speak out against it (because it’s dangerous to do so).  We’re angry right along with her.

Reading this series is painful, because we still haven’t resolved our ridiculous and deep-seated bias in this country.  For this reason alone, it should be required reading everywhere.  Reasons for challenging it have included racial slurs, violence, and inappropriateness.

Oh, my my my.  You surely know all about this one.  The U.S. has no moratorium on Potterhate; this article in the U.K. paper The Telegraph will show you that.

For non-link clickers, some reasons this book series has been challenged include:

The National Coalition Against Censorship (NCAC) provides a toolkit for schools facing such challenges, as well as individuals and authors.  Quite a few schools have tried to remain sensitive to the issue by offering alternative assignments to kids who aren’t allowed to read Potter or other fantasy works.  As long as the basic requirements of an assignment are fulfilled, I see no problem with this solution.  But as the NCAC points out on the linked page:

In many cases, parents’ concerns can be addressed by requesting an alternative assignment. While this is an attractive option, alternative assignment policies can be abused to the point of wreaking havoc upon the curriculum, which cannot be tailored to every student. (Source: http://ncac.org/resource/book-censorship-toolkit)

Whatever your stance on Harry Potter, Anne Frank’s diary, or other frequently challenged reading material, it falls to all of us to ensure that everyone has access to materials that discuss difficult subjects.  Without it, we will go backward in our development; the future will not belong to us.

Urge your Congress critter to support the free exchange of ideas and information.  Use your vote to support lawmakers who do.  Spread the word on social media.  And let people see you reading a banned book!