Food!  What do the people in your setting eat?  Is food readily available, or will they have to scrabble for it?  Gathering food means the expenditure of time and energy.  Most daily activities will revolve around getting it, eating it, and preparing it for storage.

If you have a contemporary, modern, first-world setting and your characters have enough money to live, this won’t be a problem.  But what if they don’t?  Where will they find food?  In a setting with few resources, your characters will suffer.  You could make them look in some of these places, each with its own challenges for your character to overcome.

Or they could find out what they’re eating….  #soylentgreen

In The Dark Tower, our intrepid ka-tet is fortunate that they can hunt for most of their journey when they’re not near a settled area.  Deer and other animals roam in the woods of Mid-World.  Roland, an old hand at living off the land, fashions something Eddie likes to call “gunslinger burritos” for them to eat, from whatever is available.

However, in The Drawing of the Three, there’s not much sustenance except the carnivorous lobstrosities that tumble out of the waves of the Western Sea at night.   Of course, it should be especially gratifying for Roland to kill them—after all, they did eat his trigger finger. 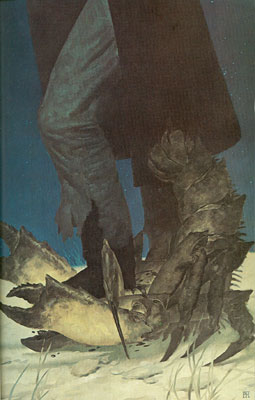 Gary Paulsen’s Hatchet is a great young adult story where a character learns how to survive after an unexpected accident strands him in the wilderness with only a small hatchet and a vague idea of woodcraft.  Brian must find shelter and feed himself from the land until a rescue comes.  This extremely popular character appears in five novels written by Paulsen.

Since we all need food to live, acquiring it can become a major conflict in your story.  Suzanne Collins sets her Hunger Games series in a ruined version of North America, where starving teens from twelve districts compete to the death to win food and supplies for their areas.  Both the Japanese novel Battle Royale and Stephen King’s The Running Man did this very well previously, though the premises were military research and entertainment for the masses (the ultimate reality show!), respectively.

Film versions:  a dark and emotional adaptation vs. a Hollywood-ized pile of silly

Besides getting food in their faces, what kind of food will your characters eat?  People living in a small agricultural community can raise much of their food.  Vegetables, cattle, sheep, and goats may grace their menu.  If they live in a seaside area, they may fish for a living.

Preservation was hit or miss—smoking, pickling, salting, and brining were common ways to keep one’s food from spoiling before it could be eaten or to help it travel well.

Victorians lived before food purity laws, so their victuals were often contaminated with all sorts of things.  Flour could be adulterated with plaster, milk with chalk, and lead was freaking everywhere.  You could not know what might be in your food; unless you grew everything from scratch yourself (not likely, especially in the city), it was a total crapshoot.

Pardon good sir; I believe I have deduced that your food is absolutely inedible.  Might I lie down and die now?  I thank you.

Depending on the period about which you are writing, your characters may not be as lucky as we are today to have clean food and water.  And cooking would not have been easy–up until the 1950s in some areas, wood stoves were a thing, and before that, cooking was done on the fire.

The time of day people eat also varies, as well as how they conduct the business of eating.  Let’s use supper as an example.  A gunslinger burrito beside the campfire might hit the spot if you’ve been tramping through Mid-World all day, and you might not stay awake long enough to crave dessert afterward.  You’ll probably want to set up camp before it gets too dark to see, so you can gather wood for your fire.

If your protagonists are vacationing in Spain, however, they likely won’t eat until much later.  The typically massive Spanish lunch does not happen until after 2:00 p.m., and tapas with your evening drinks may not even be available at many restaurants until 8:30 or 9:00 pm!

Worth waiting for, IMO, if it’s anything like this place.

Disclaimer:  Sadly, I have not been to Spain, but I hope to go someday.  In the meantime, Camino was a good introduction to tapas, which is something I had not tried before.

Rituals surrounding food vary as well.  In countries like Spain and Italy, food is an event—you don’t shovel a meal in and then leave when you go to a restaurant.  Watch some episodes of Anthony Bourdain’s No Reservations sometime and you’ll see that eating can be much more than mere sustenance.  It’s also a way for people to connect with each other.

I could go on, but you get the idea.  Food customs of your setting can either help your protagonists or hinder them.  A story need not revolve around food, but meals can bring your characters together.

2 thoughts on “V is for Victuals”