The family member with whom I have been staying and I spent our time in Richmond today, visiting some local landmarks.  I took a lot of pictures and I don’t have room for them all here, but I’ll try to show you some of the most interesting.

First, we went for brunch at The Original Maids of Honour on Kew Road, where they have been baking their little namesake cakes since Tudor times from a closely guarded recipe.  It is said that Henry VIII loved them so much he locked up the recipe.  He certainly looks as though he ate way too many of them. 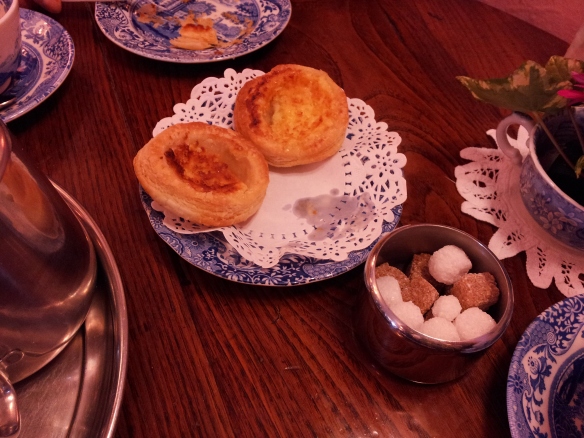 The maids of honour.  Damn, they were good.  Flaky pastry, with a little custardy center.   Om nom nom.  (Those things in the cup are sugar cubes for the tea.)

Somebody is watching us eat and I think he’s hoping we toss one up at him.

After we ate, we went up to Ham House, a fabulous example of seventeenth-century aristocratic life and architecture, on the banks of the River Thames in Richmond.  Home to the Duke and Duchess of Lauderdale, the house is one of the most haunted in Britain.

From the National Trust website, because I’m too lazy to type this out and I still have to pack:

This rare and atmospheric 17th-century house sits on the banks of the River Thames in Richmond. It is the creation of the tenacious Duchess of Lauderdale and her husband, the Duke, who together transformed Ham into one of the grandest Stuart houses in England.

Ham House is internationally recognised for its superb collection of paintings, furniture and textiles, largely acquired 400 years ago. Some of our unique objects include a rare Chinese teapot, said to have been used by the Duchess herself, and the exotic ivory cabinet. The house is reputed to be one of the most haunted in Britain. Some visitors have reported the ghostly aroma of the sweet Virginia pipe tobacco that the Duke smoked after meals in the dining room.

The house is a National Trust property, and I have a membership in the Royal Oak Foundation (Americans supporting the National Trust), so I got in free.  Sweet!  The guidebook cost me £4.50, however.  Oh well.

You walk through on your own, though there are volunteers here and there to tell you a bit more about some of the rooms.  Here’s a taste of this fabulous estate.  I apologize for the low light in many of the pictures–it was a very cloudy day, and they keep the curtains shut in many rooms to preserve the furnishings and artwork. 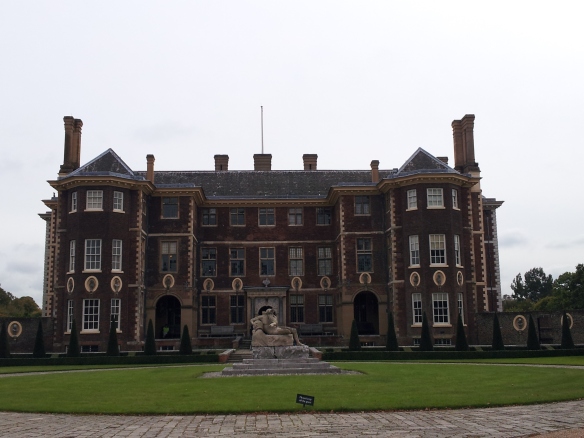 Ham House from the front.  Majestic, is it not? 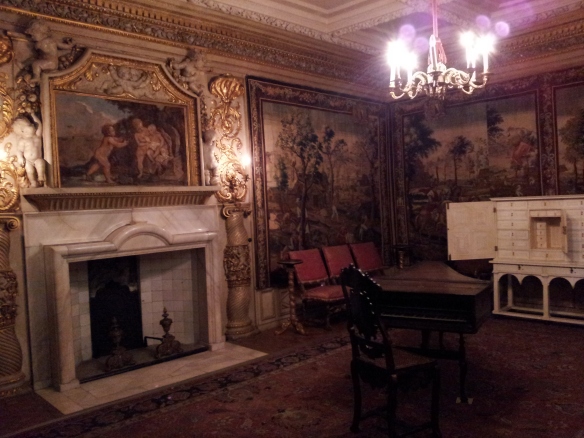 Portrait over the fireplace in the Queen’s Bedchamber.  Check out the creepy kid on the right.  Someone needs to keep an eye on him. 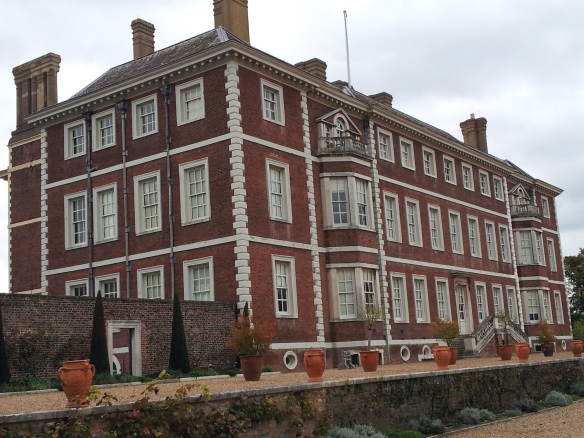 The Topiary!  Family member smelled the Duke’s pipe tobacco out here on a previous visit, and I thought I might have caught a whiff, but she told me about it beforehand, so it might have been my imagination. 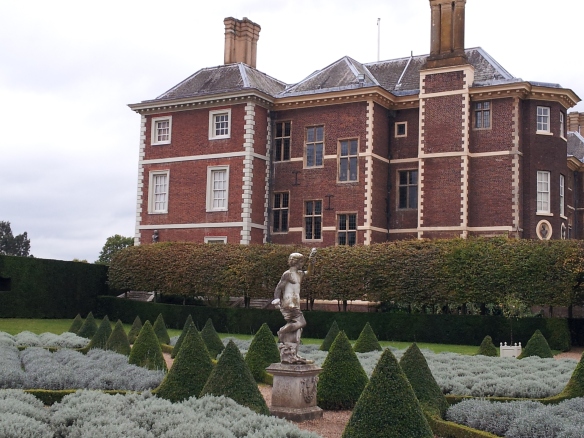 Ham House from the Topiary.  I think I like this view best.

Below stairs was where the servants worked.  The National Trust has commemorated some of them, by putting their names and drawings of what they might have looked like on the walls of their workplace.  This was nice, because most of those people passed into complete obscurity, and as myself and another visitor agreed, they worked so very hard. 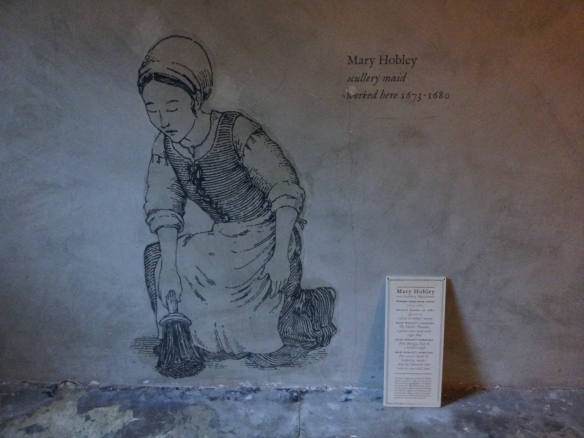 Mrs.  Henderson, the Duchess’s lady-in-waiting, and Talbot, a page boy.

William Averill, the butler.  It was through his scrutiny the food passed from the kitchen through the Buttery, before going into the dining room.  I’m sure he was very exacting.

The kitchen was an exquisite example of the Stuart period.  The staff had produced coriander and aniseseed biscuits (cookies) from a seventeenth-century recipe, and they put out samples.  They were good.

I love this long table where they worked.

Here is a shot of the storage they used.  No kitchen cabinets back then–they stored everything right there on open shelves.  This would persist up through the Victorian era. 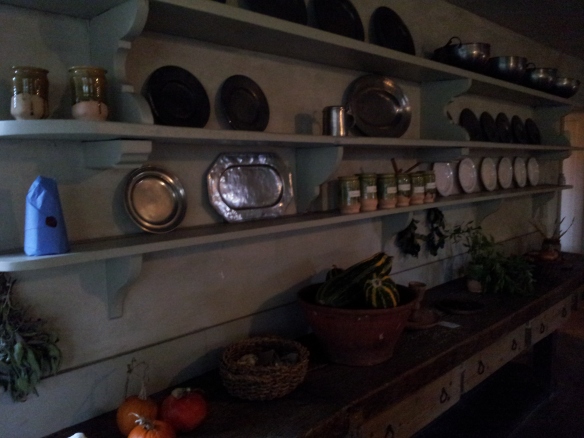 In the beer cellar, we were able to sample Moorish Ale in tiny pottery shot cups, an ale made from a 300-year-old recipe and available to buy in the gift shop.  It is like the ale the residents of Ham House would have drunk in their day.  I sampled it.  It was very nice, without that bitter aftertaste you notice with some brews. 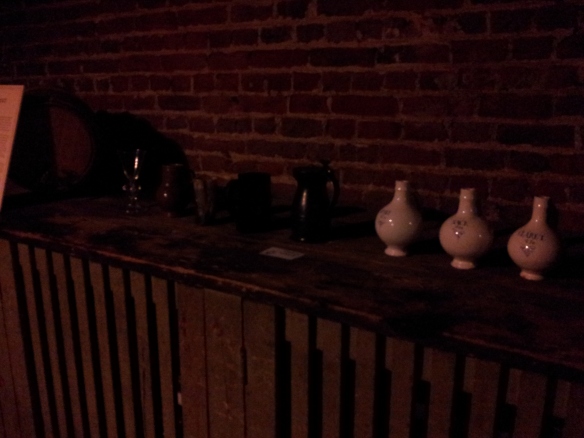 Some flasks in the beer cellar.

Some beer barrels (casks?) in the beer cellar (I’m sure these were fake, just for effect.)

There was much more to see, and I heartily recommend a visit to Ham House if you’re in London and swing out toward Richmond.  It’s quite an interesting place.

I must leave you now, because I need to pack.  It’s time to figure out how to cram everything I purchased into my suitcase and the extra bag I brought, and weigh it, and see if I can ditch some things I brought and didn’t wear that don’t fit.  They can be donated to charity shops (thrift stores that benefit charities–I bought a scarf from an RSPCA one in Chepstow).

I’ll be back in a couple of days with a reflection post.  Until then, enjoy the pictures whilst I beg the Universe to let me come back sooner rather than later.  Good night.

4 thoughts on “London, Final Day–Maids of Honour and Ham House”