I have three computers.  All of them suck right now.

One, my primary computer, is a 15” Toshiba Satellite laptop (check out the hilarious old lappy at that link!) with Windows 7, named Littleun.  It’s a fast little bugger and much more portable than its predecessor, a 17” Vista-infested, weighs-a-ton Satellite named Biggun. 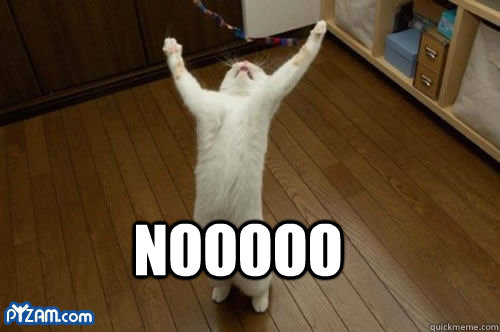 His fan had been going “WhhhrrrrRRRRRRRrrrrrrWHHHRRRRrrrrrr” for a while.  I knew it was probably the fan, but I was hoping he’d hold on until I can get a little more caught up from a year of unemployment.

Then I turned him on one night last week, thinking he was awfully quiet.  Not noticing his silent distress, I booted up Netflix for a Season 9 Bridezillas extravaganza, and *PTT!*   In the middle of an amusing screamfest, an overheated Littleun shut down.   I rebooted him to make sure the fever hadn’t fried his brain—it hadn’t, but it wasn’t safe to leave him on, so down he went.

My computer-savvy friend and I both agreed that the fan probably up and quit.  He will repair Littleun for me (I’m sure the inside is filthy—I really don’t know how to take him apart and clean him).  It can’t be soon enough.  Biggun drives me crazy, now that I’m used to Win 7 and Office 2013.  Word 2007 and Vista just aren’t happening.

But Biggun has a couple of games on him I need to finish, so perhaps I can get those done finally.  I know that at least one Myst title won’t play on Win 7.  It’s just a pain in the ass to save out documents and links I have to transport from one computer to the other.

It could be worse—I’m actually happy Biggun is available.  Unfortunately, his wireless thing doesn’t work very well.  It drops the signal all the time.  So I rolled my eyes and went to Best Buy, where I purchased an instant-gratification, overpriced, 50’ Ethernet cable and jammed it up Biggun’s port.  Now he’s online steadily, although without portability.

In the course of this operation, I discovered my long-lost short cable.  Yay!  Now the third computer, a Best Buy Insignia Windows XP Pentium IV named Old Wheezy, who refuses to die, is again online.

Old Wheezy, in his natural habitat in my craft/sewing/whatever room. Love that CRT.

Why do we have such an attachment to our machines?  We get used to their feel, their operation, and when something changes, we feel all out of kilter.  I have Tunerville on a flash drive, so I can edit at lunch when I’m at work.   That is a different machine than Littleun—a Lenovo Thinkpad—but it has Win 7, so it’s almost familiar.  But it’s not quite the same.  And I don’t get to lounge on the couch while I’m working (but no TV to distract me, hehe).

I suppose it’s better than writing the way I used to, with a pen and a spiral notebook.

Still working on editing.  Two scenes need complete rewrites, as they are clunky and unsatisfactory.  I also need to add a couple of things and complete a bit of research.

Apparently, the manuscript is still in the capable critiquing hands of Brian Keene.   He posted on his blog that he still had five for which he was waiting on publishers to see if they would want to take a peek.  Since I haven’t received mine, I’m hoping like mad it was one of the five, although he didn’t actually say (BRIAN, DO NOT MAKE ME COME UP THERE).

The suspense is killing me.  Maybe it sucked, and it’s just lost in the mail.  I must never, ever, tempt fate by getting my hopes up, but I really do wish something would sell so you could read it, dammit.   Right now, I just want to get Rose back and begin a re-edit; I’m sure Brian has lots of excellent suggestions.

If you want to make your writing better, never pass up the chance to have a more experienced person look at your work.  (Make sure they know what the hell they are doing, of course, especially if you’re paying for it.)  Grow a spine, thicken your skin, and learn to take criticism.

Well, I’m off to figure out what to bring to a weenie roast I’m invited to this afternoon.   Everyone have a safe Memorial Day!