I’ve tried to write this post a couple of times in the last two weeks, but with a big rejection, the election, and losing my job a couple of days afterward, it’s been a little tense around here.

I suspect the Q Continuum may be involved.

So, the weekend of November 5 and 6, I went to my first writing conference ever, the ShowMe Writers MasterClass.  Put on by the Columbia chapter of the Missouri Writers Guild and Mizzou Publishing, it took place at the University of Missouri.

It wasn’t Worldcon or anything, but I live within driving distance, so I went for it.  (And got lost — thank the universe I allowed extra travel time!)

The conference attendees ranged from college-aged folks all the way through senior citizens (for some reason, I noticed a LOT of seniors).  Some were published, either self or small press; many were not.  Everyone I spoke to was very nice–each of us had the same goal, to improve our work and get it published.

Featured speakers included Chuck Sambuchino, freelance editor, the editor of Guide to Literary Agents and the blog of the same name, and author of the humor book How to Survive a Garden Gnome Attack: Defend Yourself When the Lawn Warriors Strike (And They Will).  Chuck spoke on various topics including social media marketing, getting an agent, and publishing itself.

Chuck is funny, knowledgeable, and confident.  He knows how to keep a Q&A session moving.  If he doesn’t know the answer to a question, he doesn’t bullshit you; he says so.  You got it wrong?  He’ll let you know bluntly but respectfully.  He talks very fast, so you have to pay attention.  And trust me, you don’t want to miss a thing.

He’ll probably kill me for posting this, but he also moves fast, so it was hard to catch a better pic of him. 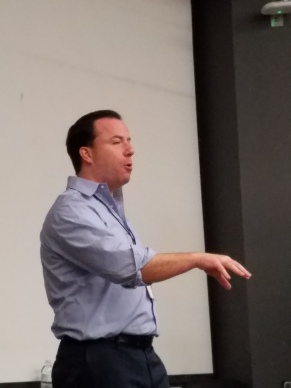 Listening to Chuck talk about traditional publishing, I realized I’m on track to get there eventually (I hope).  That was a good feeling.

Mary Buckham, a fantasy author who also has a couple of books out on writing, gave a talk and taught some craft sessions on setting and hooks.  She is hilarious and cool and I loved her.  I bought her book A Writer’s Guide to Active Setting: How to Enhance Your Fiction with More Descriptive, Dynamic Settings.  I’m considering taking Tunerville’s characters a little bit out of their time and space.   Judging by all the great information she presented in that session, I felt it would be a worthwhile investment.   I haven’t read any of her fiction.  This must be remedied ASAP.

Mary is also a delightful person and she loves helping other writers. She peppered her talks and lessons with a sharp humor; we laughed as much as we learned. 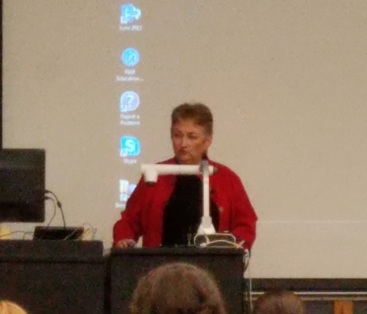 I know she looks serious here, but trust me.

Recently, an agent I queried re Tunerville requested a full manuscript and sadly, they rejected it.  BUT–I received a critique, which is the gold standard of rejections.  Agents have so much to read they rarely bother to tell you why you were rejected, but this one was very specific regarding what worked and what didn’t.  It was so nice and kind that I sent a thank-you email.

Mary told me that if I’m getting those kinds of rejections, I’m very close to publication.  I hope she’s right; I don’t want to give up on Tunerville just yet.  It pains me to move on from a book when I have expansive plans for sequels, etc.

However, we writers know it’s best to keep working.  When that call comes, the question will arise:  “What else are you working on?” And we need to have an answer ready!

Each track had sessions pertaining to marketing, craft, and mentoring so we got the most relevant information for our categories.  As much as it pained me to miss the screenwriting stuff (a thing in which I have interest), limited time and concurrent scheduling kept me from it.

I also would have liked to attend the visual storytelling session, led by presenter Cole Closser, a Will Eisner Comic Industry Award nominee whose art has a really cool 1940s vintage vibe.  Because a story is a story–but again, I had to pick between him and something else.  Eeny meeny miney mo. 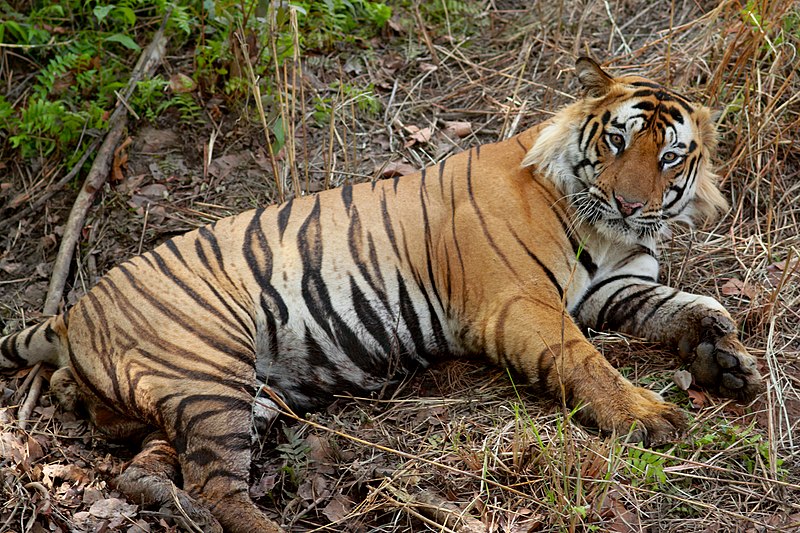 Ain’t nobody catching ME by the toe.

The mentoring sessions with some of their featured experts were set up as either one-on-one, which cost extra, or in small groups of the first six people to arrive.  During the character building session, which comprised an analysis of character elements in Kafka’s The Metamorphosis, I think I hit on ways to fix Tunerville.  That was probably one of the most valuable bits of the conference for me.  Thanks to Gordon Sauer for lending his expertise.

You can also use these gatherings to network with other writers or even agents.  ShowMe Writers Masterclass also offered a pitchfest, which is an activity where writers can actually spend a few minutes with a real, live agent and tell him/her about their book (pitching it–this is like a mini-query, but in person).  See the link for more information.

This also cost extra, and none of the featured agents represented my work, so I skipped it.  But I did get to chat a bit with one of them at their table and took the agency’s business card, because who knows?

Things I Learned from the Masterclass

Aside from the craft and marketing stuff.

I had a great weekend, despite the driving.  Bonus; a chat room friend lives close by, so we got together for dinner and went to see Doctor Strange with her friends and her husband (it was awesome! Go see it!).

If you’ve never attended a event like this, I highly recommend it.  Google writing conferences in your area; you’re bound to find some.  Get out of your cave and mix and mingle.