Will there be indigenous animals in your story?  Your setting’s fauna will reflect other elements such as climate, topography, and the introduction of non-native species at some point.  Usually, this last is caused by human travel and/or habitation.  There are few unspoiled places left on the planet, no thanks to us.

We’re dirty things, we are.

If you’re creating an imaginary world, you’ll still have to work within these parameters if you want it to be somewhat realistic.

I’m mostly done poking you in the brain with Stephen King’s The Dark Tower.  If you haven’t already, I hope you read it before the whole Hollywood mess comes out.  However, I have one more thing to discuss: 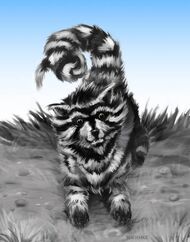 Known in the High Speech as throcken, billy-bumblers look like a cross between a dog, a badger, and a raccoon, as King describes them.  They have luxurious fur, corkscrewed tails, and beautiful gold-ringed eyes.  At least, Oy does.  I’ve seen lots of different depictions of Oy in fan art.  Bumblers have limited speech—it seems imitative, but Oy is clearly intelligent and can count a little—so I think it’s more like with certain species of parrots.  They’re very smart and some experts think they’re capable of a degree of reason and communication.

Aside from Oy’s species, Roland’s world contains animals most of us are familiar with:

And some we wouldn’t be:

Oy is definitely the best animal in the series, and one of the best characters too.  Your animals may not be characters (or plot points either; bear attack, anyone?) but they’re worth including.

This shit is why I don’t go camping in the high country.

They can lend quite a bit of color to your setting.  Let’s say your characters find themselves in a jungle.  This biome is full of life–monkeys chirp and howl, birds screech, snakes will slither across the debris on the forest floor.  And you can’t forget the insects and arachnids.  Some tropical spiders have leg spans the size of a dinner plate.  You can look that up if you want; I’m not gonna.

Readers can relate to characters with pets.  You can play them for comedy–a pet parent who spoils her little Yorkie or kitty, or who names a Doberman Poopsie.  Use them for drama–a couple splits up, and who gets to keep the dog?  If you’re a heartless bastard, you can even twang people’s emotions with them.

NOOOO NOT THE DOGGIE!

If you’ve never thought about including animals in your fiction before, give it a try.   Whether you write or just love to read, share your favorite fictional animals in the comments.  Who are they and why do you love them?  How do they enhance their settings?