A lot of writers tend to describe things visually—but consider your other senses.  Next to sight, the first thing many people will notice about a place is how it sounds.

Is it loud?  Is it quiet?  If you dropped a blind character in the middle of it, what distinctive noises would he hear that could tell him where he is?

Is it a city?  Some things you might hear in a city include:

What do you hear and what makes it different from any other city? In Europe, sirens have a distinctive two-tone sound that lets you know where you are the second you hear it.  Sadly, for reasons Britain phased out the two-tone siren and now London sounds just like any other big city.  Ah, the good old days.

If it has large parks, different parts of it near those spaces will be quieter.  If it has large sporting events, it might contain a stadium.  Crowd sounds, lots of honking, etc. after games let out, people laughing, beer bottles shattering, etc.  A smaller town will have some traffic noises at certain parts of the day, but unlike New York, it will quiet down when everyone has got to work or school.  Parts of London can be surprisingly quiet at night—but that can be true of any big city.

If the town has a river through it, you’ll hear boat horns, and if it is a port city, most likely seagulls.  This is not a given; I live smack in the bellybutton of the US and we have seagulls at the city landfill.

Move to a more rural setting and you can have animal noises.  Cows pretty much sleep at night, unless a farmer is weaning calves, and then you get to listen to them bawl for hours because they’re separated from their babies.  Don’t ask me how I know this.

Sounds not only lend your setting atmosphere, but they can even contribute to the plot.  Todash is a state where you can travel between worlds in The Dark Tower.  It’s not a pleasant thing; unnerving chimes (kammen) herald your approach to this state.  One of the ways you can go todash is to, um, die.  When someone hears those chimes, shit’s about to get real. 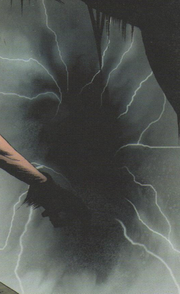 The TARDIS in Doctor Who has its own sound; you can’t mistake it for anything else.  In this case, it functions as a character tag, a unique identifying device that only goes with that character (and yes, the TARDIS is a character).  You can use sound in the same way to distinguish your world.  Hear it in your head and then put it on the paper.  With practice and skill, your readers will hear it too.

6 thoughts on “S is for Sound”