Once you’ve come up with your setting(s), you must decide what to call it (them).  In this post, I discussed some aspects of The Lord of the Rings place names that bring to mind their characteristics. The Shire, for example, is a peaceful place.  Our hobbits are farmers and shepherds, akin to rural village folk in the world of Men.

The word shire is of British origin; it’s an old term denoting a division of land and is still attached to some county names that also bear the name of their principal city, such as Lincolnshire and Yorkshire (England), Aberdeenshire (Scotland), Pembrokeshire (Wales),etc.  It calls to mind a pastoral country setting or village.

We like it here and we don’t need to go on no stinkin’ quests.

Look at some other place names in LOTR and some of the impressions they bring to mind.  Say them out loud—the sounds evoke their essence (Tolkien was a linguist).

Ralston, Illinois, my city in Rose’s Hostage, sounds solid and industrial, which gives you a picture in your mind of the city (well, in mine, anyway).  It’s a no-nonsense name.  There is a Ralston, Nebraska (it’s a small place), but I actually chose the name from the hot cereal.  To me, it felt like a strong, working-class name that would reflect the majority of its Midwestern population.  I could imagine the people who built the city eating this for breakfast.

Yes, we know it tastes like the box, but it sticks to your ribs!

Think about the origin of the words you choose.  Will they reflect the geography, like Rivendell?  What impression would you have of a town called Valley Falls (Oregon)?  How about one called Bloody Corners (Ohio)?

Place names can refer to more than just a town or city.  Though houses with names tend to be large estates, often smaller dwellings have them too.  In the Harry Potter books, the Weasley family home is called The Burrows.  What does that tell you about the people who live there?  What adjectives does it bring to mind?

Try this exercise next time you have trouble picking a name for something in your setting.  Make a list of several descriptive words relating to it.  Then try to come up with a word that makes you feel them when you say it.  It can be a real or a made-up word.  You’ll know when you pick the right one.

Listed here are some of the places in The Dark Tower. 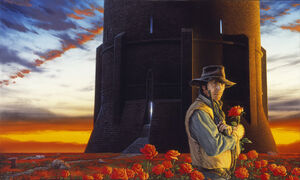 Roland standing in Can’-Ka No Rey.  Note the cloud following the path of the Beam.

That’s not my favorite picture of Roland.  It looks too much like Clint Eastwood (the original inspiration for the character).  But it’s a great picture of the Tower and the roses.

Writing these posts and sticking The Dark Tower in them has made me wish I could think of something this complex.  I may have to sit down and give it a try.  I’m sure I can think up some dandy names for stuff, even if it never gets off the ground.  Why don’t you try it too?