A day behind; bear with me.  I’m trying to run around and work remotely at the same time!

Sometimes you have to travel to do research.  Reading about something or someone won’t cut it.  You want to hear sounds, see things for yourself, feel textures, and smell smells. 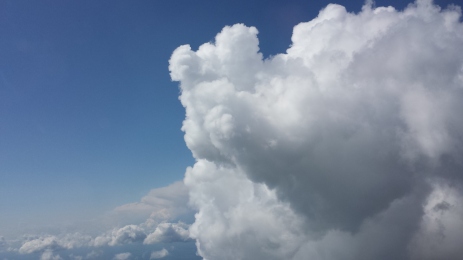 For example, you can’t describe the poofy marshmallow mountains of clouds until you fly right by them.

You might notice I’m back in London.  I’m actually here because of an event my online soundtrack nerd pals and I will attend (more on that in a later post), but since I spent most of my holiday in autumn holidaying, I didn’t get much research done.  So I’m using this time to try and buckle down.

I’m trying to think of places my characters might go, things they might have eaten or drunk, etc., and visit what’s left of them, if possible.  Today, I went to the Museum of London and looked at their exhibit of things from 1950 and beyond.

I did find some things that my character(s) might have touched and worn and used, in addition to learning a bit about the era.  Thanks to a cheap notebook I bought in the gift shop (see, I told you I’m flying by the seat of my pants–how the hell did I get all the way over here without a notebook!?), I managed to jot down quite a few things I can check into further.

After a delicious sandwich at Pret a Manger (they’re everywhere), I walked up the street toward St. Paul Tube station and whoopy, there was St. Paul’s Cathedral.  I have never been to it, so I walked around it in the gardens.

Character 1 might have walked here one day, when contemplating, and looked up to see this.

Update 5/26/15: I am SUCH a dweeb. I realized just now that I forgot to put this picture in the post.

Though I suspect mostly tourists go inside, people do use the lawn and gardens when it’s sunny, as it was today.

It was around four-thirty in the afternoon, and I noticed they had a service scheduled for St. George’s Day, with a choir.  I’ve never been to an Anglican church–I grew up Catholic, so I thought, what the hell?

Look where I sat.

Since my British character would probably have gone to church regularly as a small child, I wanted to see what the service was like.  It’s very similar to a Catholic mass and even has communion.  As St. Paul’s welcomes all baptized members of any denomination up to this ancient ritual, and as I haven’t taken communion in ages, I did.  Exactly the same as a Catholic one.

I even had an idea for a scene I could do later in the book, during one of the angsty parts.  Heh heh.  Thanks, God.  Hope you heard the request I put in with the little Vespers candle.

When I came out, this happened:

Then of course, the Picadilly line at peak time. Yes, it really is like a sardine can.  It doesn’t bother me that much, unless the train gets stuck or I’m wearing too many layers of clothing.

If you’re going to travel to do research, I suggest you become more organized than I am before you go.

Now it’s time for bed.  We have plans to lunch with a dear friend and visit Isabella Plantation tomorrow–I know I went there last time, but now it’s spring and the azaleas will be in bloom.

4 thoughts on “T is for Travel”