Sunday.  I don’t have much time left–baww!  We spent today with my step-cousin, who lives in Hammersmith (a London borough).  We took a lovely walk along the Thames to her son’s school, where they were having a car boot sale to raise money for the school.  It’s like a huge swap meet where people park their vehicles in and use them as booths. 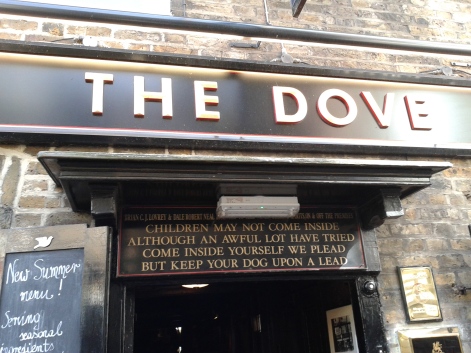 Here is a funny sign above a pub tucked into an alley we passed on the way.

The Dove has been here since the seventeenth century.  I’m a bit sorry we had a drink at a different pub.

Here’s a picture of the car boot sale.  I bought a pretty sparkly bracelet from a funny man who waved an American flag with 48 stars at me and tried to tell me the bracelet was real diamonds. I also got a cute purple plaid satchel for three pounds. I’m such a sucker for tote bags–it’s awful. 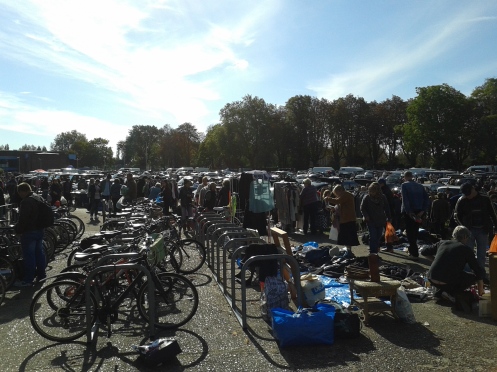 After we walked back, we went across the Hammersmith Bridge to see my cousin’s allotment.  These are community garden spaces you can apply for in the city.  You can grow things, if you don’t have a space of your own.  This site, though not London, explains how they work–you pay a bit of rent and keep up your bit of land.  My cousin grows lovely vegetables and flowers on hers. 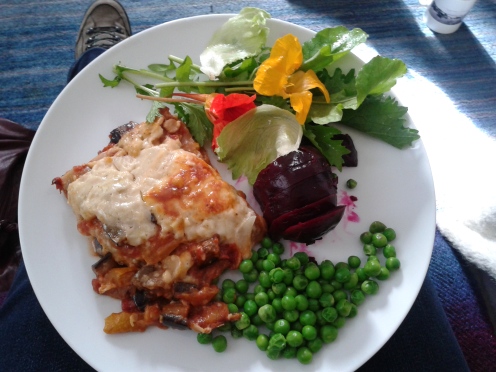 She’s also a fabulous cook. Some of this is from the allotment.  That’s vegetarian lasagna, with spelt pasta and soy.  The flowers are nasturtiums–they are edible and kind of peppery, like watercress.  It was delicious.

I think allotments are a splendid idea.  The English take their gardening rather seriously, and this is a fantastic way to have one if you don’t have any yard space.  It allows people to grow their own food as well.  And they foster a sense of community, as everyone gets to know everyone else.  That’s hard to do in a city the size of London sometimes.

We walked over Hammersmith Bridge to reach it.  It’s quite a pretty structure, though I have a phobia of high bridges over water and the trek across it was nerve-wracking for me. 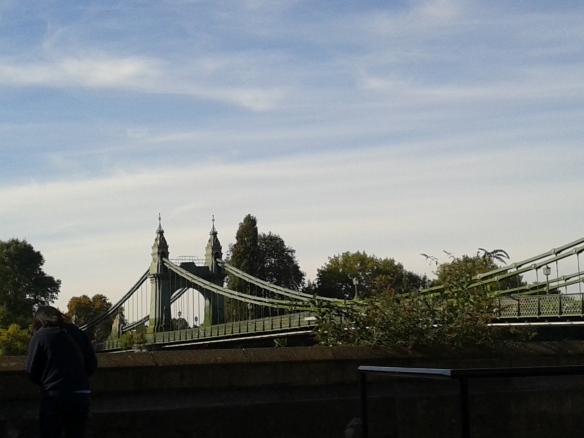 It was a beautiful day, though a bit nippy in the shade.  The sun shone, runners and cyclists were everywhere, and many flowers were still blooming in private gardens along our route.

Okay, first, let me say this and get it out of the way.  This attraction at Warner Bros. Studios, which contains actual sets, props, and costumes from the Harry Potter films, is a HUGE tourist trap.  But if you are a Potternerd such as myself, it is worth every penny.

You catch a train from London Euston station to Watford Junction (about twenty minutes north), and a shuttle picks you up outside the station and takes you right to the attraction.  Both the train ticket and the shuttle are fairly cheap.

At rush hour, or just before, Euston is NOT this empty.  Trust me.

Today, the holiday gremlins were strong.  I got a late start catching the bus to the train station.  A small delay on the District tube line did not help matters, and by the time I had transferred twice to the Picadilly and Victoria lines, I had resigned myself to missing my train at Euston.

I tried to get another ticket for the next train or print mine and see if I could use them again (I could), but the machine wouldn’t cooperate.  The ticket agent told me to print them at Watford, so I did.  It was also raining today and cold.  Like see-your-breath cold.  I didn’t wear a scarf because I wanted to buy one at the attraction, so I nearly froze.

The items at the attraction are the actual ones used in the films.  You can take pictures.  And I did.  Here are some of them (I might get in trouble for posting them, so I’m going to only post a few.  If you want to see it and you’re going to be in London, go here to book tickets.  You must book in advance 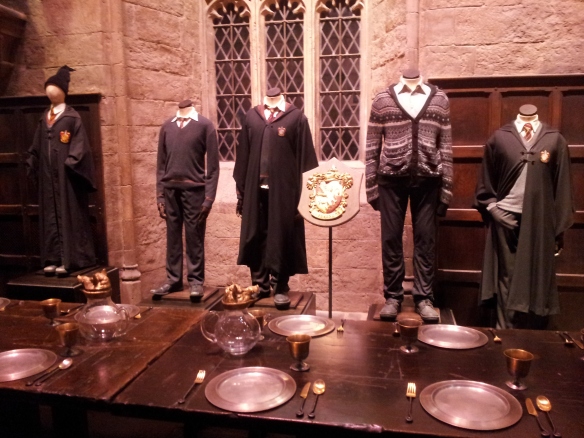 Gryffindor costumes in the Great Hall. 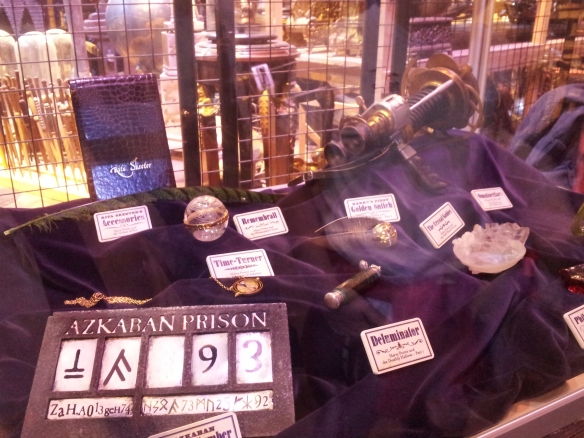 Assorted small props that every Potternerd will recognize. 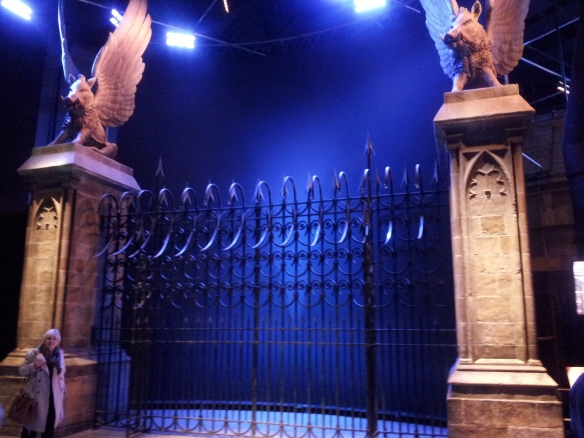 The gates of Hogwarts! 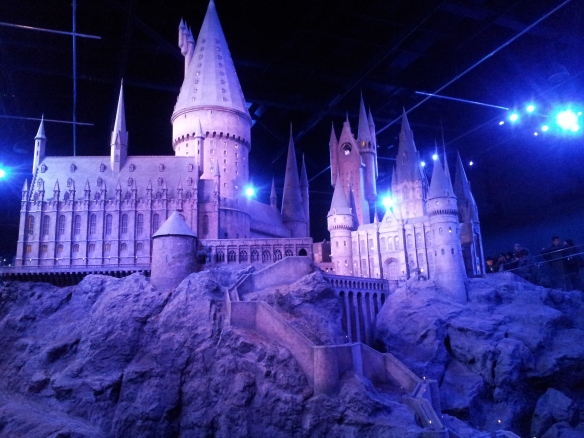 GASP!  No seriously, when I walked in and saw this large model, I actually gasped. 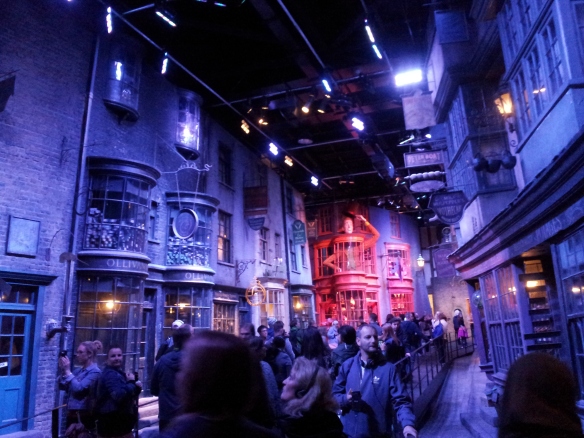 Do your wizard shopping here.

After a hot dog the size of my arm (a sausage, really), some crisps, and a cold butterbeer (which tasted like cream soda with whipped cream in it–everyone was saying it was awful) about halfway through the tour, I hit the gift shop.  Everything in there is overpriced–seriously, £7.95 for a chocolate frog? Yeah it was huge, but still.  Okay, yes, I bought one!  And a Gryffindor scarf and some Hogwarts gloves, because still freezing.

Going back, I just managed to hit the edge of rush hour on the Underground–masses of people moving through narrow tiled corridors and down tight staircases, crammed close to strangers on the train, sitting next to them on the bus.  The reason people ignore everyone on the tube is because it’s weird to have them so close.  But that’s how public transport is, so you just have to deal with it.  I tend to stare at the tube map above the windows or at the floor.  I see a lot of interesting shoes that way.

Tomorrow, I’m going to try and get downtown and to a couple of art exhibits.  I had so much stuff on my itinerary and I’ve been so sidetracked I haven’t made it to any of them.  I need another week.  Wonder if my boss will mind?

Well, a girl can dream, I guess.  Come on, Bardarbunga.  Cough some ash up into the air and postpone my flight.