I apologize for getting behind–I’ve been busy!

Today was shopping day–I ran around the center of Cardiff and had the most delicious crepe ever at Sophie’s Creperie in the High Street Arcade. 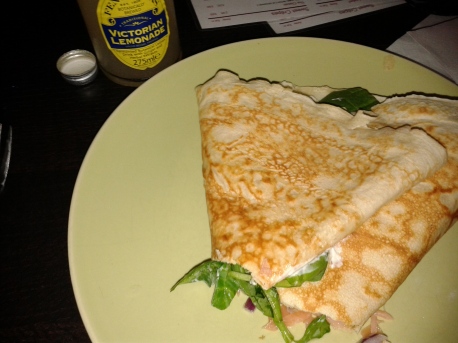 Go there and order the Atlantic.  Smoked salmon, spinach, red onion, and crème fraiche.  Do it now.  I’ll wait.

You hear tell that restaurants in the UK and Europe have smaller portions.  What the HAIL, because I keep getting platefuls of food that are as big as my head.  The fish and chips from the last post?  Half a damn fish.  This crepe was huge–but it was so light and delicious it didn’t seem like too much food.

On the way back from shopping, I stopped at Cardiff Castle, where a county fair was on at the castle grounds.  I took the tour of the castle just for grins. 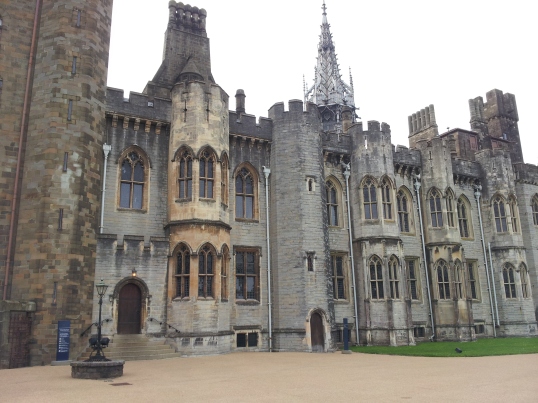 This is what the back looks like from the grounds.  I could live here.

Though there has been some fortification there since Roman times, the current building is mostly a Victorian mansion formerly owned by several Marquesses of Bute.  Now it is owned by the people of Cardiff, and if you live there, you can get a key that lets you gain free admission for three years.

The Victorian part of the castle is designed in the Gothic Revival style, a fashion at the time heavy on medieval details, and was renovated by William Burges for the third Marquess of Bute.  Click here for some photos of the interior.  Our guide for the tour was a hilarious older Welsh lady–I loved her.  As a sample of her wit, we had to climb down a very long, very steep spiral staircase to get to the dining room, and she said she was no dummy–she’d stay at the back so if she fell, she could land on us!

Here is the dining room.  The hole in the table is for a tree.  No, I’m not making this up.  They put a grapevine through the hole and guests would eat grapes off it for dessert (called pudding in the U.K. even if there’s no pudding). 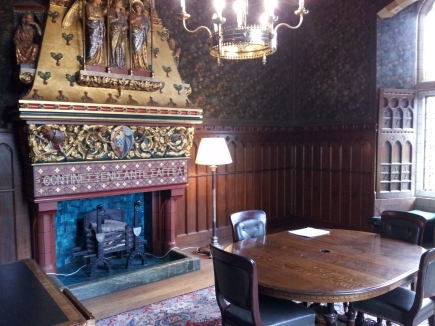 It’s good to be rich. 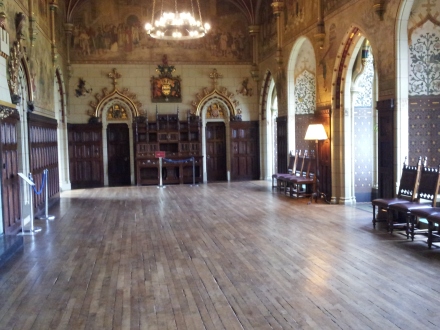 You can rent this ballroom.  It’s not really that expensive.

I saw this in the nursery and nearly died.  I think I actually recognize this from one of the doll’s house books I have.  Unfortunately, I wasn’t allowed to play with it.  Darn! 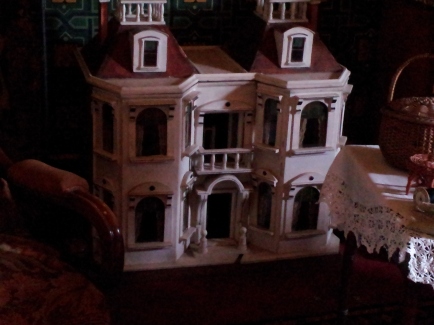 The nursery walls are decorated with illustrations from fairy tales and fables.  Some of them would scare the crap out of most little kids. 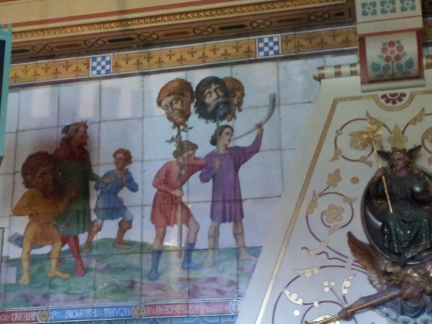 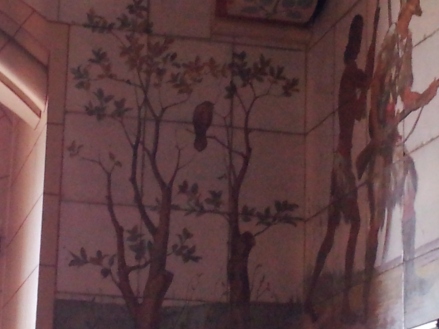 The Invisible Prince.  See if you can spot him. 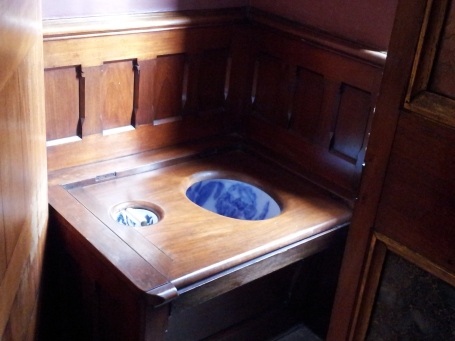 A Victorian flush toilet, in the loo in Lord Bute’s bedroom

Okay, I know I keep talking about toilets, but to a person with a tiny bladder, they are rather important.  In Britain, there are plenty of public places to pee.  I suppose I’m not the only one who needs them in a nation where everyone drinks so much tea, coffee, and alcohol.  These beverages are notorious for creating the need for a loo (bathroom).  Many toilets here have a button you push instead of a lever.  On trains, the loos are twice the size of those on an airplane.  I wish they’d take out a few seats and make them bigger on the plane.

I’ve got plenty of room in the en suite loo at my bed and breakfast, but they crammed in a shower that is so tiny that my backside shuts off the water if I turn round.  Other than that, it’s the coolest place I’ve ever stayed.  It’s a Victorian house like the one I always wanted, and I get a lovely breakfast every morning. 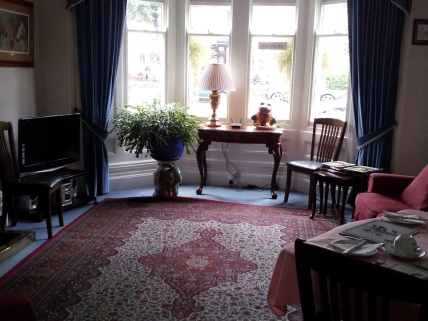 The Town House Guest House, Cardiff.  Tell Charles and Paula I sent you.

The day I went to the Castle, the Cardiff County Fair was also taking place on the grounds.  People brought sheep, goats, cattle, and other animals. 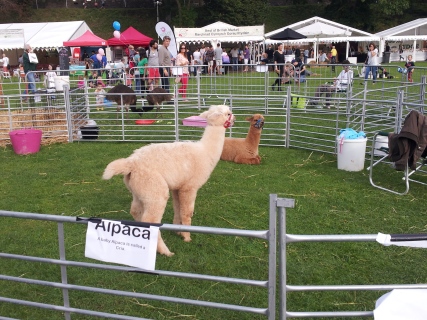 Right after I took this picture, baby alpaca dropped a load.

This is the old Keep (part of the original castle, pre-dating the Victorian mansion). 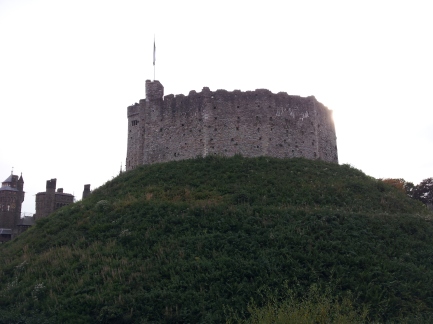 I climbed to the top and took a video (it’s lame, and a bird flies through it halfway, but you can see what it looked like anyway).

Later that evening, I went to see the twentieth anniversary tour of Riverdance at the Motorpoint Arena in Cardiff.  For those who don’t know, Riverdance is Irish step dancing, set to music composed by Bill Whelan.  The story traces the people from their Celtic origins and the power of humanity, through the myths and legends and trials of the Irish, to their emigration and their integration with other cultures.

I don’t think these dancers are human–no one can move that fast.  In the Thunderstorm number, the dancers make the music WITH THEIR FEET.  They bounce around like they’re on springs.  I especially enjoyed a West Side Story-style competition dance between two city toughs and the Irish boys.  In between dance numbers, we were treated to some great pieces by the musicians of the show.  They also had a lovely singer with a beautiful and plaintive soprano.

Here’s a taste from an older video I found on YouTube.  IIt’s not exactly like the one I saw, but it’s close.  This piece is called Reel Around the Sun, and it’s the opening number to the show.  American figure skater Jason Brown did his U.S. Nationals and Olympic long program to this music (quite wonderfully, I might add).  It’s my favorite of the Riverdance music.  I highly recommend this show–it’s just brilliant.

Next post, we’ll visit Cardiff Bay, Penarth, and Tintern Abbey in Chepstow (this last is what I did today).  I’m tired and need to go to bed soon.  I only have one more day in Wales, and frankly, I don’t want to leave.  But London awaits–and with it, perhaps my destiny.  Or so one can hope.