P is for Potency.

I was going to write about perception, but I realized that I’d already touched on that in a couple of other posts in this series.  And I was exhausted yesterday, so I trashed my P post and went to bed.  Now that I’m awake and infused with British culinary delights from the city’s best food truck, I shall tackle yesterday’s and today’s posts.

Potency is a noun meaning efficacy, effectiveness, or strength.  We spoke about kryptonite, or weakness.  Every character has to have something he is better at than anyone else.  And you can use this ability or talent in the story in unexpected ways.

Think about your favorite characters.  What’s the one thing they can do that no one else can, or the thing other characters always seek from them?  What about them makes them able to achieve their goals despite incredible odds?

My potency is quite obvious, isn’t it?  Now bring on the next client.  I’ve got through five already before breakfast.

Thought not a magical genius like Hermione Granger, Harry Potter is quite an excellent wizard, practically speaking.  He managed to cast a Patronus charm well before any of his classmates could (in fact, he taught them to do it in Order of the Phoenix).  He isn’t the best student; but since someone is always trying to do him in, that’s understandable.  He still got decent grades despite all the craziness.  His flying and dueling skills are top-notch.

But the thing he is most potent in, his most important quality, is his strength of character.  Harry will protect anyone he cares about to the death if necessary.  He’s absolutely without guile, and he always seems to know the right thing to do. 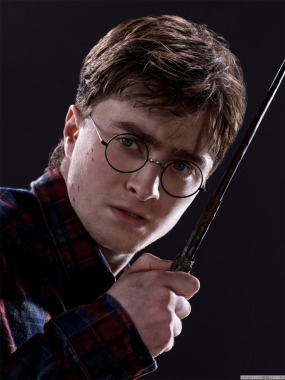 I’m hardly perfect; I passed out during my History of Magic exam and failed!

No wonder Voldemort couldn’t defeat him.  In order to vanquish one’s enemy, one has to understand that enemy.  Harry was a mystery to the dark wizard, who couldn’t understand friendship or love or loyalty.  People gave their lives to protect Harry because they loved him.  Voldemort’s followers mostly feared him.

Combine potency with kryptonite and your protagonist might find himself in the throes of a conflict from which it will take him most of a book to disentangle himself.  A person who always sees the good in others might lean too far toward giving them the benefit of the doubt.  Before she knows it, she could be:

When I said I’d help with your TPS reports, this isn’t exactly what I meant.

When you assign your character potency, be careful you don’t give him too much power.  It could get out of control and become a weakness.  Absolute power corrupts absolutely, and even a good person can become overconfident in his own abilities to the point of disaster.  Of course, this could make a really good story even better.

2 thoughts on “Character: P is for Potency”