I spend most Saturday mornings skating, either with or without a lesson.  Today I worked on my Adult Bronze Freestyle program, set to music from Final Fantasy X.  I’m still wondering what I’m going to wear when I finally test it.

Elite athletes spend big bucks for the right costumes, some put together especially for them by top designers.  Kids’ outfits are often made by their moms, or purchased plain and then embellished by same.  Adults are mostly on their own. 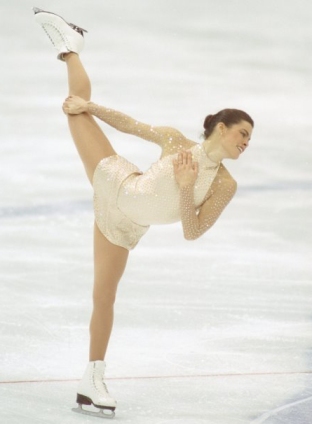 We can’t ALL wear Vera Wang.

I’m an adult recreational figure skater, and while I’m not obese, I ain’t skinny either.  I can’t afford to buy dresses or have them made for me, so I bought a sewing machine and learned to make my own.

I use Kwik Sew patterns, which are interchangeable.  If the skirt is too short on one, I can substitute something else.  I’m also tall, so I had to lengthen the bodice and sleeve patterns.  The instructions are easy, and the patterns simple.

I have two ready-made dresses, and I only wore one of them once.  It’s a lovely purple dress with spaghetti straps .  Let’s get one thing straight.  I’m a woman, and I have boobs.  The only way I felt comfortable in the thing was to wear a nude leotard under it.

Mostly, I try to stay away from:

I don’t have the body for these (yet—I’m working on it).  No need to accentuate bumps I don’t want anyone to notice.  Besides, the good ones are pricey.  I don’t want to waste them on a homemade crap costume.

They flare out nicely, but unless they are a bit longer than usual, they make my hips look bigger.  Flat skirts actually are better for a fuller figure.

If you have sticklike arms, go for it.  Or, preferably, if you’re under ten years old.

Ever notice what happens when a lady in a figure skating dress skates backward really fast?  The underpants on that dress need to cover your butt completely.

The purple spaghetti strap dress I mentioned earlier is covered with sparkles and is flowy and beautiful.  I can’t bear to get rid of it.  It’s like a faint, closeted hope that I may someday be able to go bra-less.  But without something underneath, one jump and Janet Jackson will be on her knees thanking God she’s not me.

It’s cold in there, dammit.  Not only do thin fabrics show things I wish they wouldn’t, they’re not warm enough.  I favor stretch velvet, not too shiny.  Sometimes it’s still not enough, so I use a stretch lining fabric or that extra leotard.

An extra layer also helps conceal any supportive garments.  Technically, you’re not supposed to wear anything under a skating dress, but I’d rather not distract the audience with flying body parts.

Here’s an example of a gorgeous costume on a mature skater.  This is Dr. Marci Richards, competing at the Adult National Figure Skating Championships.

Skating costumes reflect the character of the music.  They’re not as literal as stage costumes, unless you’re in Disney on Ice.   Like the words you choose when you’re writing, your colors and embellishments help set the tone for your program.

For adult skaters, it’s certainly possible to look as great as you skate!