Not literal underwear, but the underneath part of the story that sometimes flashes glimpses at you like a bra strap or the shocking flash of bright-colored boxer briefs when the pants slide down and the shirt rides up.

Some underwear is backstory.   A flashback intrudes, and the protagonist takes it out of the mind drawer and examines it.  Holes may appear or the memory may be pristine.  Either way, we get a good long look at the underwear. 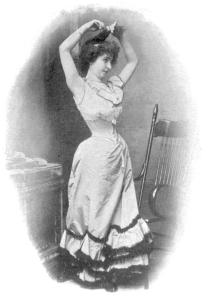 Some types of underwear are more complex than others.

Others are things we all do but writers rarely put in a story.  Simple, everyday things.   Eating, smoking, peeing—you ever notice how many book characters never go to the bathroom?  I mean NEVER.   In certain genres, they don’t have sex either, not even in situations where any normal person’s underwear would be hanging from the doorknob.

Little bits and pieces of underwear help define character.  What a person chooses to reveal—or not—tells the reader and the other characters more about them than they may care to permit.

People always think they can tell writers what to do.   “You know what you should do is—“ has become a phrase I dread to hear.  It’s usually followed by uninformed blather from someone who doesn’t know crap about anything.

“You should write children’s stories.”

I don’t do that.  I like writing about sex and violence, thank you very much.

“You should write something that will sell!”

What the bloody hell do you think I’m trying to do?!

(After you’ve explained what a query is) “Put in your query letter that your mother liked your book!”

Skate I will, for skate I must.

Like Tiny Batman says, stay true to your vision.  If you don’t, your writing will suffer.  You and you alone know what you are good at, what works for you, and how you want to approach it.

That doesn’t mean you shouldn’t do everything you can to learn new techniques.   It doesn’t mean you can’t explore new ways of publishing.  Make sure you listen to that voice inside you.  Don’t let people who don’t know any better tell you what to do.