I love: to be daring.

When I write, I can do things I would never do in real life.  Some of them are not so pleasant.  In Rose’s Hostage, I committed a couple of murders.

How does it feel to do these things on paper?  Strange.  I know sometimes people get confused and think writers really do the things they write about.  “Write what you know” doesn’t cover those who are professional liars, however!

No, I never killed anyone, although if those kids across the street don’t stop revving that pocket bike back and forth, I might.  Now get off my lawn! 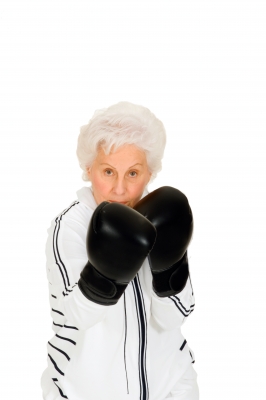 You behave, youngster, or I’ll sic my granny on you.

Daring also happens when I write about controversial subjects or something really out there.  That’s one reason I like horror fiction.  Some of the most twisted scenes I’ve ever read (and enjoyed, heh heh) happen in this genre.  Sometimes I have to say something no matter what the risk, but usually I try to consider my audience.

It’s funny, but I’ve also noticed there is more sex in horror and less in other mainstream genres, like thrillers.   Let’s say you have a hero and heroine running around hiding from some crazed conspiracy and they end up going to ground for a while, thinking each moment could be their last, and they obviously find each other attractive.  And they do NOTHING?!?  In real life there would be some serious boinking.

My characters will occasionally boink.  They’ll go to the bathroom, too.  If you don’t like it, read something else.  I’m not taking it out because someone else thinks it’s too daring.

This is the falling action after the climax of a piece. It’s hard to write it unless you have cliffhanger stuff going at the end.  Anyone who remembers watching Scooby Doo cartoons as a child will remember the lame jokes that come after the ghost/monster/creature is finally captured and unmasked.   This is how I feel writing denoument scenes, like I’m trying to finish a Scooby episode.

It also annoys me because it’s not always obvious where to stop.  And some types of stories have clearer ends.   In a crime novel, for example, the cell door clangs shut and it’s over, or the bodies are carted away.  A literary story or a character piece is a bit harder.    I think my difficulty with denouments will fade with time and experience.  After all, the best way to learn to write is to do it.

4 thoughts on “Daring and Denoument”