Love the weather around here tonight; the first tornadic storms of the season.  Wheee!

Gotta go to work tomorrow.  I hate Mondays.  All I would like to do is sit and write but that’s not happening just yet.  The winter has frozen my brain, so books and articles aren’t going as well as I would like.  I plan to make some more queries soon for Rose’s Hostage, now that I have a Guide to Literary Agents.  Perhaps I can target them a little better this time around.  If the next list doesn’t make it, it will be time to shelve it.  Poo.

I promised you some pictures from my recent trip and here are some I particularly liked.  Keep in mind that I am NOT a professional photographer, or even a talented amateur.  I apologize in advance for any eyestrain or seizures that result from viewing these photos.

Tucson, Arizona has some really cool mountains.  In fact, it’s surrounded by them.  Here are some:

Yes, I took that from Someone’s car. Them’s some pointy mountains.

Tucson also has a lovely little zoo.  Most of its denizens are typical, like these two: 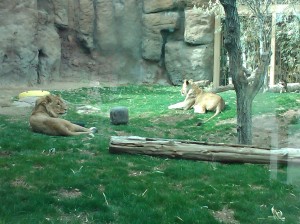 African elephant; you can tell by the ears (bigger). Someone special took this one. :)

And this handsome fellow: 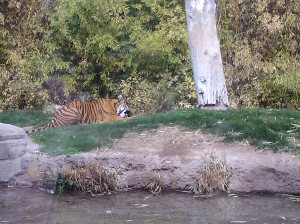 Here’s a capybara, an unusual animal.  He’s the world’s largest rodent, about the size of a medium dog.  Waaaay bigger than I pictured him; this was the first time I’ve seen one other than National Geographic.

AND…a roseate spoonbill!  I love these birds.  They are so sweet-looking.

Pretty bird. I wanted to pet it soooo bad...

Okay, enough aminals.  Up around Oro Valley sits Biosphere 2, that big greenhouse thing those scientists spent a couple of years in the early 1990s living in while they did experiments.  It’s called that because it’s named after Earth, which is Biosphere 1.

Today the University of Arizona runs it and there are still lots of experiments going on, mostly about climate changes.  You can tour the biomes and even see one of two big air exchange “lung” things that give the biomes a fresh breath now and then.

The outside of Biosphere 2: 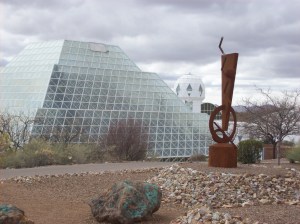 Pretty, isn’t it? This is one of my better pictures.

Here is the South Lung room, under Biosphere.

Right above this well is a great big disk attached to a huge rubber membrane.  When they open the doors, the air rushes through and the disk lowers, where legs keep it from hitting the ground. 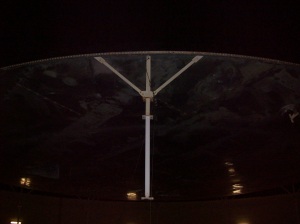 The disk. See the legs? Is it dark in here or what? Big echo chamber, too.

This is the desert biome. 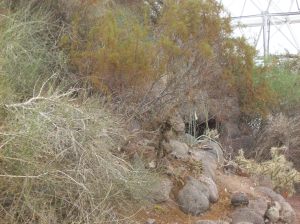 A lemon growing on a tree in a side area.  I don’t know why, but I found the lemon really funny. 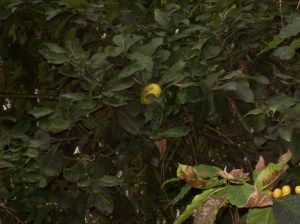 The beach and a million-gallon ocean! With real Pacific Ocean water! Yes there are fish in it!

And the rain forest.  So pretty…

If you ever get the chance to visit Biosphere 2, please do.  Support research and science wherever you can.  Hopefully current scientists working here will learn more about our carbon dioxide levels and find a way to curb the human factor in climate change.  We are having an effect, even if it’s not as dire as recent predictions have said.

South of Tucson is the Mission San Xavier del Bac, one of the best examples of Spanish Colonial architecture around.  Here’s the outside of the place.  If you go, make sure you try some of the Indian frybread being sold in the parking lot.  Mmmm. 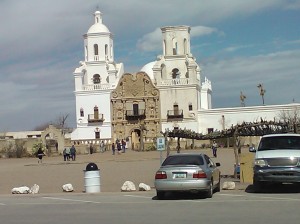 I’m sorry if this is blurry. I FORGOT MY CAMERA (!!!) and had to take them with Someone’s phone.

Traveling is fun (except for flying; see previous post), and I had an interesting idea I might use in a future project.  Writers should get out of the house once in a while and go someplace new.  Living in your head ain’t really living.

2 thoughts on “Pictures and Weather and Work: Oh My!”