Today’s letter is brought to you by fire, fellowship, fraternizing and fiends.  The title words, spoken by a fiend in a fairy tale, fall under fighting words.

Farrier – a person who shoes horses.  Not to be confused with the blacksmith, who makes the horseshoes.  In olden times they often did both, and some still know how.  Modern farriers mostly stick with shoeing and caring for the horse’s feet by trimming the hooves and monitoring their health.

Tumnus: a friend, not a fiend.

Fealty (FEE uhl-tee) – fidelity, faithfulness, loyalty to the lord of the manor.  In The Lord of the Rings: The Return of the King, Pippin swears fealty to Boromir’s father Denethor, Steward of Gondor, as a partial atonement for Boromir dying while defending the hobbits from Uruk-Hai.

Finial – the decorative knob on top of a table lamp, which probably doesn’t give you enough light to write by.  It was Colonel Mustard in the writing room with the finial.

Fiction – the hardest kind of writing to make a living from.  Most novelists never get to quit their day jobs.  I won’t give up!

Fjord (feey-ORD) – you probably know this one.  A Norwegian word, it means a narrow inlet of the sea.  Here is a lovely picture of one.

Flashback – a scene that cuts into the middle of a narrative to inform the reader of something that took place before it began.  Sometimes writers put a flashback in a different tense to make it stand out.  It might be long enough for its own chapter, or just a short segue without any breaks.

Flagellum – the whippy, tail-like thing a protozoa uses to move around.  Sort of like rowing a boat with an eyelash.

Focaccia (fo-CAH-chuh) – a delicious Italian flatbread, sometimes baked with herbs and cheese and garlic and—and…mmmMMMhhhaaaaaa where did I put my napkin ‘cause now I’m drooooliiinnngg… 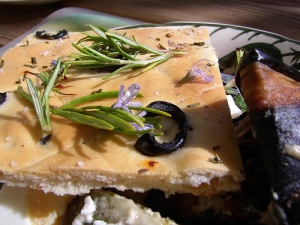 That’s a good-looking bread, that is.

Fontanel – the soft spot on the top of a baby’s head.  The skull bones of an infant have not yet ossified, and the resulting space is covered by membrane.  Handle with care.

Frame narrative – a larger story that encompasses a smaller narrative, and comes to a close at the end.  Mary Shelley’s Frankenstein is a frame narrative, with the bedraggled Victor Frankenstein telling his horrific tale to the ship’s Captain Walton, who has rescued him in the frozen North.

Friable – crumbly.  Usually used to describe asbestos, which when friable is dangerous because it releases fibers that can cause serious lung damage when inhaled.

Fugu (FOO-goo) – puffer fish, a Japanese delicacy.  Fugu must be meticulously prepared because it is poisonous.

Fumarole – vapor hole in a volcano.  “Stay away from that fumarole, Robin,” Batman warned, “the ground is friable there—GOOD GOD!  ROBIN!  He’s gone!”

FX – popular abbreviation for effects, or special effects, in film and television.

Fyke – a fish trap held open with hoops.  No, really.

That’s all for today.  Enjoy your new words!