Re my last post:  you’ll be getting a lot more pictures from now on!  All the shots in today’s post were taken by me.

Here I am complaining there is nothing to do in Springfield, and lucky me, I received an invitation to the grand re-opening of a local historical landmark, Pythian Castle, now a performing arts and events venue.

The Knights of Pythias, a fraternal society similar to the Freemasons, built the Pythian Home of Missouri in 1913 for the purpose of housing orphans and widows of the members and as a meeting place.  One of those orphans, Mildred Hall Cherry, turned ninety years old today.  Happy birthday, Mildred!  She was on hand for the Grand Re-Opening ceremony to celebrate her birthday and share her reminiscences with the audience.

Mildred Hall Cherry on her 90th birthday, August 7, 2010. Check out her awesome t-shirt!

Mildred was eight when she and five of her six siblings came to Pythian Castle in 1928 after their father died.  The loss of the breadwinner was very hard on the children’s mother, and she wanted to keep them together.  Putting the kids in an orphanage was not an unusual practice at the time.  Mildred and her siblings went home eventually, after their mother remarried.   She stayed in the castle for eight years.

The boys and girls in the orphanage were segregated.  Two staircases lead to the second floor; one for the girls, one for the boys.  No one was allowed to use the opposite one and the boys and girls could not even speak to each other.   Mildred barely got to know her own brothers, including the smallest who was only 23 months old.  She said she could often hear him crying but there was no way to go to him. 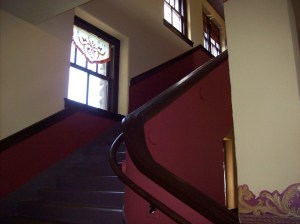 In 1942 the United States Army took ownership of the castle and used it as an adjunct to nearby O’Reilly General Hospital, which treated injured troops.  It became a service club for recovering veterans.  Such notables as Bob Hope appeared in the second floor auditorium, which also housed Springfield’s very first movie theater.

Mildred told us it was a great treat to watch silent films in the auditorium.  It cost a nickel for the public to attend.  She said, “A nickel was hard to come by in those days.”  If only things cost so little now!

German and Italian WWII POWs were interned at O’Reilly and spent time maintaining the grounds and buildings there along with those of the castle itself.  There are several cells in the basement, but whether or not any prisoners were actually confined there is unproven.  A Japanese POW is rumored to have painted the walls in one of the basement rooms.  Here are pictures of his work:

Sun picture. This room has no windows. 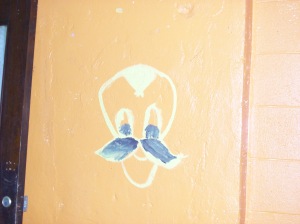 Funny little face. Was this a caricature of someone in charge, perhaps?

I think he might have been homesick; reminiscent of Japan.

The Army owned the building until 1993, when it was sold as surplus.  It is now privately owned and run by Tamara Finocchiaro and her mother.  They have extensively renovated the property.  It serves as a performing arts venue, as well as an events center.  You can get married at Pythian Castle, go to ghost hunting workshops, rent it for private parties, and take dance lessons.  I’m going back for the last one.

The building has beautiful woodwork and Tamara and her mom have redecorated while staying true to the feel of the original property. 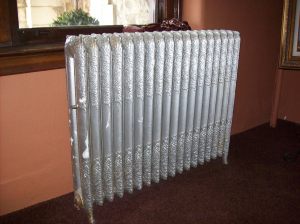 All the radiators are the old, scrolly kind. I had one of these in an apartment once; steam heat is fantastic.

Upstairs, the two staircases open out onto a spacious landing.  It was right in the middle of the landing where I had an unusual experience during one of the ghost workshops.  I was walking down toward the doors at the end, when there was a stir of air next to my hand and a very strong presence.  It was a small person, like a child, and I had the feeling that a little hand was about to slip into mine.   You know how when someone is about to touch you but they don’t quite do so, how that feels?  It only lasted about ten seconds.  I stood very still and waited.  I should have had someone take a picture of me at that moment.

Here is the landing. 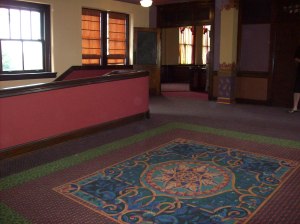 Look in the center of the picture, and in front of the auditorium doors to the right, on the jamb. 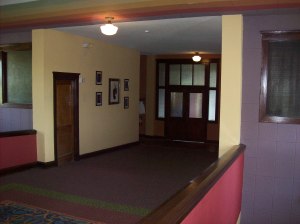 Look right over the door toward the left of the picture.

You notice anything in those pictures?  Some people think orbs are signs of supernatural energy.  In the first picture, they could be just dust reflecting the light of the flash.  There is an anomaly in the dark part of the picture, some distance away.  It’s very interesting that they only show up in those pictures taken in that spot, and in no others that I took today.  And I was thinking (and talking) about the that experience at the time.  Just file it under “things that make you go hmmm.”

The castle is a happy place.  It has very good vibes.  It’s not the least bit scary, and Mildred said except for a little redecorating it looked very much the same as it had when she lived there.  To have weddings and dancing and food and friends there only reinforces its original purpose, to care for the people the Pythians loved.

If you get a chance to come to Springfield, there are regular tours of the castle.  It’s now on the National Register of Historic Places, and has been certified haunted by the Ozarks Paranormal Society.  More information can be found on its website.

2 thoughts on “A Castle in the Ozarks”